Spotlight Initiative celebrates the 16 Days of Activism across five continents

The 16 Days of Activism against Gender-Based Violence is an annual international campaign that kicks off on 25 November, the International Day for the Elimination of Violence against Women, and runs until 10 December, Human Rights Day.

In support of this civil society initiative, under the leadership of the UN Secretary-General, António Guterres, the United Nations Secretary-General’s UNiTE by 2030 to End Violence against Women campaign (UNiTE campaign) calls for global actions to increase awareness, galvanize advocacy efforts, and share knowledge and innovations. The theme for the 2021 16 Days of Activism campaign was “Orange the World: End Violence against Women Now!”

Around the world, the Spotlight Initiative and its partners organized activities to raise awareness on violence against women, consent, and mutual respect.

In the framework of the 16 days of activism campaign, the Argentina National Sports Secretariat, together with the Spotlight Initiative in Argentina launched a new campaign titled #NoEsNormalEsViolencia (It's not normal, it's violence) inviting all sports clubs to participate by sharing and amplifying the message of the campaign, in order to make visible the various forms of expression of gender violence in sports. The messages were particularly focused on violence against LGBT+ women who experience different types of gender-based violence on a daily basis in Argentina and around the world. In sports, derogatory comments about bodies, taunts, invitations, and sexual innuendos, and sexist expressions that belittle women, deepen inequality and constitute different acts of gender-based violence. In order to transform sports into a space free of discrimination, fair and safe, it is essential that we all work to denaturalize the practices that constitute violence.

The Spotlight Initiative also released a TV sport titled #ParemosLaPelota (Stop the ball) calling on men to stop perpetuating gender-based stereotypes and stand up for gender equality. In the key of soccer, an environment in which men are socially enabled to express their emotions, the objective of the campaign is to reach them and society in general with a clear message: we must stop naturalizing daily macho attitudes, stop the ball, and do not let what is wrong happen.

Influencers joined the campaign on Instagram. Miss Universe Belize hosted a WithHer Talk episode with other beauty pageants to share their experience as survivors of violence and the way they now use their platforms to address gender-based violence.

The Spotlight Initiative Belize also joined a week-long docuseries broadcasted on national television with an episode titled “Women In Spotlight Initiative”.  The episode was part of a wider docuseries put together by the United Nations Resident Coordinator’s Office in Belize. The episode highlights some of the many women who are at the forefront of eliminating violence against women and girls in Belize.

In collaboration with the Spoused of the Caribbean Action Network (SCLAN), the Initiative also hosted a virtual event on Engaging Men and Boys. This event brought together a diverse panel of individuals from all walks of life to discuss what men and women can do to address gender norms in Belize, support gender equality, and eliminate violence against women and girls.

Radio journalist Tracey Folwer interviewed Spotlight Initiative partners and advocates on their work to eliminate violence against women and girls in the Caribbean region.

The Spotlight Initiative in Ecuador launched a campaign titled #EseTipoNo. The title of the campaign has two meanings: 1) This guy, no!; 2) This type (of relationship), no!. The campaign was built with the participation of the members of the national reference group of the Spotlight Initiative, made up of women leaders and activists committed to women's rights, in addition to the support of United Nations agencies, the European Union, public entities, and international organizations. The campaign was shared through traditional and non-traditional media, with a large emphasis on social media in Ecuador.

In collaboration with implementing partners, government agencies, and other UN agencies, the Spotlight Initiative Guyana held two virtual dialogues (episode 1 - episode 2) to highlight the programme's results via Facebook live sessions.  In collaboration with sports clubs and under the purview of the Guyana Football Federation and Guyana Cricket Board, the Initiative hosted two interactive awareness-raising sessions on gender-based violence prevention.  The UN Resident Coordinator, EU Ambassador, and senior Government officials participated to talks shows and TV interviews while radio and TV PSAs were airing on national channels.

In Honduras, the 16 Days campaign gathered the contribution of 8 artists who created 18 itinerant pieces. The campaign was named "She was called like you and me, she had a name and a story", which referred to women victims of femicide. At the same time, the campaign was directed to healthy non-violent masculinities. In order to give greater impact and visibility, it was decided to carry out a joint campaign with the Gender Equality Board, which includes the United Nations System and other cooperating partners, in order to raise a single voice.

In social networks, the visual campaign was made in reference to women's and girls' clothes, alluding to the fact that these clothes are abandoned because women were murdered and accompanied by a song written by a feminist group. The art show was also accompanied by the use of women's and girls' clothing in their maternity wardrobes for the same theme and was presented in the municipalities of Intibucá, La Ceiba, and Tegucigalpa. The activations took place in the central squares of these cities where hundreds of people.

A symbolic altar for the victims of femicide was also built for the event, and the public was able to see the artwork and speak directly with the artists. An obituary was also published with the names of the women who have died in 2021.

The Initiative sponsored a film festival titled "Spotlight Shorts", an ongoing TV screening and discussion programme that aired on national TV. The films highlighted stories related to the issues of domestic abuse and intimate partner violence.

Four teams of Jamaican filmmakers and writers are bringing powerful real-life experiences of survivors of gender-based violence to the screen through the Spotlight Shorts JA project. The teams and the survivors whose stories are being shared were provided with psychosocial support, as part of the preparation for film production. Each team was also assigned a mentee – a young person from a vulnerable community who has an interest in filmmaking – to help build skills and share information about the film industry with youth.

In this video, Silver Strikers FC player Blessings Tembo encourages everyone to take action in the fights against gender-based violence in Malawi and to report violence cases when they occur.

The voices of pain, struggle, and demand for justice of survivors and defenders of victims of femicide were heard in the Senate of the Republic of Mexico as part of the activities of the Spotlight Initiative in the framework of November 25, International Day for the Elimination of Violence against Women and the 16 Days of Activism campaign. The event gathered mothers of victims, survivors, activists, representatives of the Senate, representatives of the UN, and the EU. Watch the recording of the event here. Another tribute to victims of gender-based violence took place in Cd. Juárez, Chihuahua, to honor their memory and to foster a space for reconciliation and dialogue with survivors of gender-based violence, their families, and civil society.

In Ecatepec, civil society organizations and street artists worked on a new mural titled "Truth and justice for all [women]" in Ecatepec, State of Mexico, as a means of symbolic and collective reparation for victims of femicide and their families. The mural seeks to convey a message of life, reconciliation, and peace in society. The artwork was supported by the Spotlight Initiative and the Ministry of Women.

The Niger programme organized a Soccer tournament between students from the university and the national institute of sports and young women from the police forces. The tournament was attended by the EU ambassador in Niger, the UNRC and the Secretary-General of the Ministry of Promotion of women. It was an opportunity to gather with civil society, heads of RUNOs to promote positive gender roles. 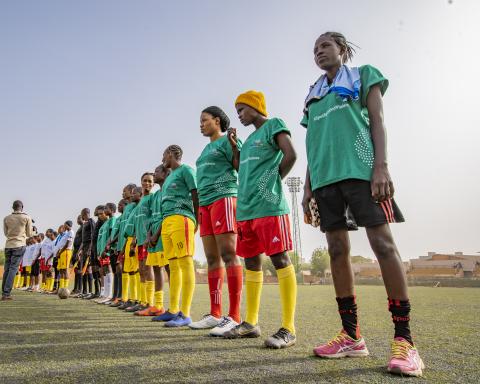 Activists, artists, and influencers joined the 16 Days campaign on social media through videos calling to unlock women and girls' potential and calling on the youth to stand against all forms of violence against women and girls.

Spotlight Initiative Nigeria organized a soccer tournament between UN personnel and implementing partners to highlight their common goal of ending violence against women and girls and to call on men to take action in the fight against gender-based violence. 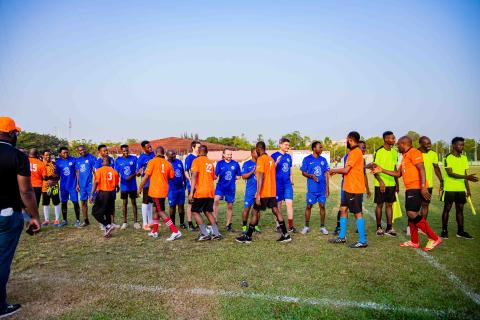 The Torch of Hope. Led by the Ministry of Women Community and Social Development in partnership with the Samoa Police, Prisons and Correction Services, and with the support of the Spotlight Initiative, a 16-days long run was organized during the 16 days Campaign across Savaii Manono and Upolu.

The Torch carried the prevention message across Samoa of "Stopping violence before it happens' (TAOFI AE E LEI TUPU) which are some of the many efforts led by the Ministry to advocate for a change in behavior promoted in the developing National Prevention Framework for EVAWG. Once again, institutional and CSO partners in Samoa showed their passion and dedication to ending violence against women and girls.

The 16 Days of Activism campaign concluded with the “Orange Ball” girls football tournament held in Dushanbe under the Spotlight Initiative in collaboration with Tajik Professional Futsal League. A total of 224 girls, aged 13 to 17, participated in the tournament across the country. 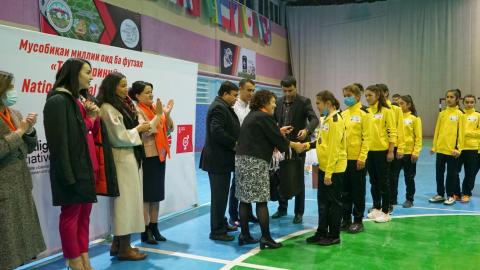 Recognizing the critical role culture and art professionals play in reflecting the challenges faced by society including the issues of gender equality and gender-based violence, Spotlight Initiative supported artistic creations that aimed to break down stereotypes, show different perspectives, change mindsets and engage in action.  More than 1000 students participated in mobile theater shows in Dushanbe to raise awareness on gender-based and domestic violence.

Spotlight Initiative supported the production of Mat Mo Pig (literally mat and pig) a film of Wan Smolbag Theatre - a Spotlight Grantee - that is giving voice to the story of a survivor of rape, and her experience in enduring the traumatizing legal process and trials while facing the court and her aggressors. Why must a rape survivor prove in court that they were raped and what does it say about a society that puts the burden of proof on survivors? These are some of the questions that the film is posing to policy-makers and society in Vanuatu through their film Mat Mo Pig. Read the article about the movie and watch the trailer here.